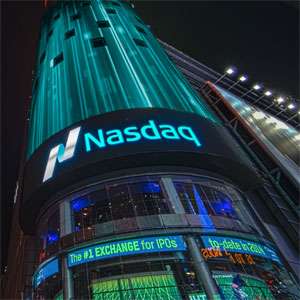 Nasdaq and the S&P 500 closed at all-time highs yesterday showing continued strength from the mid-day rally. However, trading volumes were 23% lighter than average. Only 5.8 billion shares exchanged hands yesterday on the consolidated tape. The one year daily trading average stands at 7.2 billion shares a day. April has been a light volume month as well averaging 6.5 billion shares with only 2 days this month hitting the 52 week average.. As we discussed yesterday, lighter trading volumes coupled with economic growth (even muted) and higher highs for stocks are signs of Goldilocks Economy.

Today, U.S. equity markets are trading flat to lower to start the day. Consumer Staples, Utilities and Real Estate are the best performing sectors. Currently 6 of the 11 S&P 500 sectors are trading higher while Communications, Consumer Discretionary and Financials underperform. Crude oil and Gold both trade higher. The dollar moves lower as does the yield on the 10-yr which now stands at 2.51%.

Earnings season marches on as a number of large and mega cap companies will report in the next 24 hours. 269 members of the S&P 500 have reported to date. The average upside beat for that index now stands at 6.43% for the quarter while sales estimates are still coming in flat. The quarterly earnings growth rate stands at 2.2% while the sales growth rate is for a positive 3.75%. Companies expected to report tonight and tomorrow morning include AAPL, AKAM, AMD, AMGN, MDLZ, CLX, CVX, GRMN, HLT, IDXX, WLTW and YUM.

U.S./Chinese resume trade talks. Treasury Secretary Steven Mnuchin said officials will know this week or next if a deal is possible. Munchin told Fox Business yesterday that “We hope within the next two rounds of (talks) in China and in D.C. to be at the point where we can either recommend to the president we have a deal or make a recommendation we don’t … There is a strong desire for both sides to see if we can wrap this up or move on.”

The FOMC starts their 2 day meeting today and a rate decision is set for 2pm tomorrow. The current Fed Fund Futures Rate now stands at a 67% cut by year end of a quarter basis point. Mike Block summed it up nicely today stating “there are a lot of divergent threads going into that (meeting).  One thread says that Bullard could dissent and call for a rate cut, another says that the tone could be more hawkish given markets and data, and yet another says we could hear mention of a Standing Repo Facility that could boost hopes for both stocks and Treasuries….You will notice that the bond proxies lagged and right now the 2/10 is wider at about +24 bps as the 2/5 has uninverted.  This may be surprising given that U.S. data yesterday was mixed at best, and amidst chatter that the Fed is considering instituting a standing repo facility that would allow banks to exchange Treasuries for reserves if need be.  Maybe we will find out more with the FOMC decision tomorrow.  Indeed, this backup in Treasury yields may be related to expectations that the Statement looks more hawkish on the margins.”

There is an abundance of economic data coming out this week not only here in the US but also overseas in Asia and Europe. Last week the US Q1 GDP came in at a robust 3.2% vs. expectations of 2.3%, however this outsized “beat” was more the exception than the rule as of late. Just last week the U.S. Citigroup Economic Surprise Index made fresh 52-week lows and has declined in five of the prior six months.

Across the pond in Europe the economic data has not been as robust compared to the U.S., but relative to expectations the data has actually been improving since January. We highlighted this divergence two weeks ago on 4/16 showing the Eurozone Citigroup Economic Surprise Index bottoming in January and then rallying to five month highs in March. We noted then “Simply put the economic data in the United States is surprising more on the downside than that in the Eurozone. While this could be temporary, it may be the early stages of a new trend.”

Today’s EZ economic data has continued the recent trend of “beats.” The euro area unemployment rate fell to 7.7% from 7.8%, a new post crisis low. Meanwhile Q1 GDP growth accelerated to 0.4% QoQ, vs. 0.2% in Q4, and expectations of 0.3%. Notable beats were seen in in Spain and Italy, the latter emerging from recession following negative growth in Q3 and Q4’18.

Theoretically the stronger economic data reduces the chances of additional stimulus at the next ECB meeting in early June.  While there remains plenty of additional data, corporate earnings, and geopolitical events which will come out before then which could change the improving economic outlook, markets do not stand still. Investors of all stripes have positions on which they may or may not feel good about over each passing day. Specifically I am referring to the EURUSD currency pair which has been front and center on our radar in recent weeks.

The EURUSD stumbled out of the gate at the start of 2019 with three consecutive months in the red, albeit with a relatively modest Q1 decline of (2.2%).  In reality the weekly period chart shows a lot of sideways, choppy price action with decreasing volatility.  Last week the pair broke down key support at the 1.12 level which had the potential of being the start of a new trend lower, however on Friday we warned it could be a “false move” and if so implied a sharp reversal to the upside could be in store.

Adding kindle to this technical setup is the narrowing ranges and decreasing volatility that has been taking place this year. The width between the upper and lower Bollinger Bands are coming off 40 years lows, while the weekly Average true Rage (ATR) just made a 23-year low. These measures reflect growing forces between buyers and sellers, a key battle whose outcome will determine the direction of the next trend. Given the extreme narrow ranges and low volatility, the eventual transition from consolidation to trend could be accompanied by powerful momentum.

Weekly CoT data shows non-commercials with their highest short position since late 201 and may suggest there are already too many euro bears on one side of the boat. Note in 2017 the EURUSD had its strongest annual gain (+14%) in 13 years.

Another consideration is the rate differentials. The 10-Year U.S. Treasury – Bund spread reached a 30+ year high last November, +279 bps, and is currently forming a textbook topping pattern (head & shoulders) with key support (i.e. neckline) at the ~243bps level. If that support gives way it would confirm a reversal in underway which in and of itself would bode well for the euro, and I suspect a positive for overall risk sentiment.

For now the EURUSD has returned to the scene of the crime, the prior support at 1.12 which for now is acting as resistance. Today’s data is simply not enough to trigger the transition from consolation to trend. While the next ECB meeting is more than five weeks away, the Fed and Chairman Powell step to the mic tomorrow. With their recent history of surprising markets on both sides of the hawkish-dovish spectrum, I wonder if Powell and the committee will grace us with another surprise. If so the reaction in the EURUSD could be stronger than most expect given the aforementioned technicals.

Charles Brown is Associate Vice President on The Market Intelligence Desk with over 20 years of equity capital markets experience. Charlie has extensive knowledge of equity trading on both floor and screen based marketplaces. Charlie assists with the management of The Market Intelligence Desk and works with Nasdaq listed companies providing them with insightful objective trading analysis.

Steven Brown is a Managing Director on the Market Intelligence Desk (MID) at Nasdaq with over twenty years of experience in equities. With a focus on client retention he currently covers the Financial, Energy and Media sectors.

Christopher Dearborn is a Managing Director on the Market Intelligence Desk (MID) at Nasdaq. Chris has over two decades of equity market experience including floor and screen based trading, corporate access, IPOs and asset allocation. Chris is responsible for providing timely, accurate and objective market and trading-related information to Nasdaq-listed companies.

Brian Joyce, CMT is a Managing Director on the Market Intelligence Desk (MID) at Nasdaq. Before joining Nasdaq Brian spent 16 years as an institutional trader executing equity and options orders for both the buy side and sell side. He also provided trading ideas and wrote technical analysis commentary for an institutional research offering. Brian focuses on helping Nasdaq’s Financial, Healthcare and Transportation companies, among others, understand the trading in their stock. Brian is a Chartered Market Technician (CMT).

Michael Sokoll, CFA is Associate Vice President on the Market Intelligence Desk (MID) at Nasdaq with over 25 years of equity market experience. In this role, he manages a team of professionals responsible for providing NASDAQ-listed companies with real-time trading analysis and objective market information.