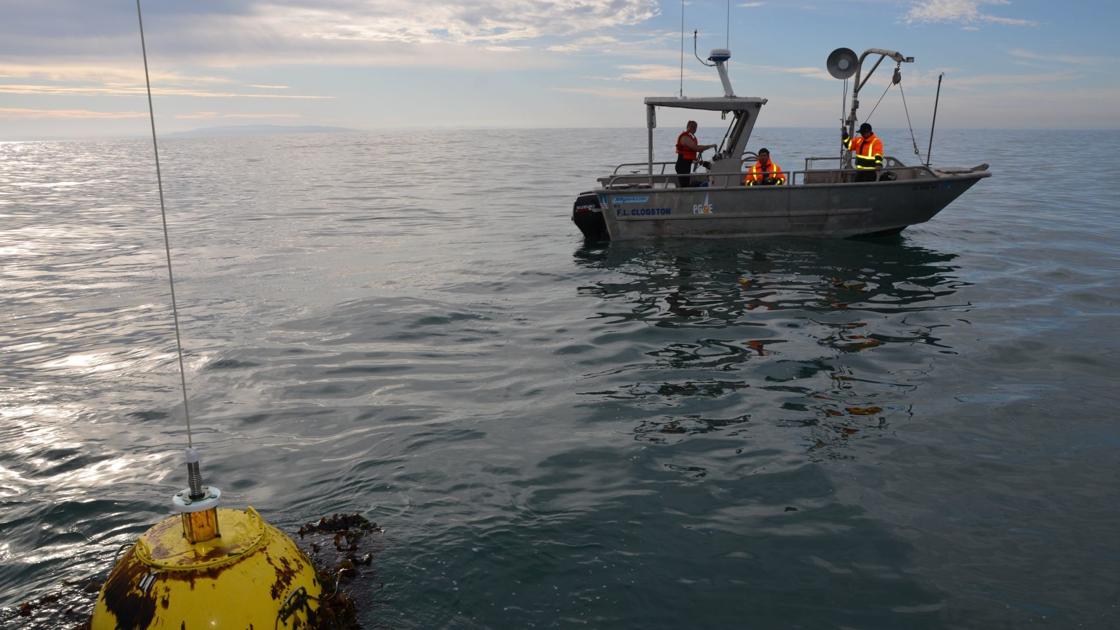 Most of us enjoy a big storm or watching large waves crashing along our stunning coastline and the surfers who harness the waves’ power for enjoyment. But it’s also serious business for those who make their living from the sea and others who rely on accurate weather forecasting.

To help predict storms and swells that move in from the world’s oceans, the Coastal Data Information Program (CDIP) at the Scripps Institution of Oceanography in San Diego and the National Data Buoy Center at the Stennis Space Center in Mississippi operate a vast network of buoys that dot the Pacific, Atlantic and the Gulf of Mexico.

Over the years, the number of buoys has increased which is terrific news and here’s why.

CDIP started in 1975, when Dr. Richard Seymour and his team installed a single wave measurement station at Imperial Beach. It used underwater pressure sensors and transmitted its data through armored electrical cables through the surf zone to a nearby land-based field station. In the late ’70s, waverider buoys manufactured by Datawell, a private company based in the Netherlands, came into use, allowing data collection from locations further offshore by utilizing radio telemetry and not underwater cables.

Today, waverider buoys not only measure wave height and period along with sea surface temperature but also wave direction. Currently, most of the waverider buoys now transmit their data through the Iridium satellite constellation.

Over the past decades, the CDIP team — initially led by David Castel, Dr. Robert Guza, Dr. William O’Reilly and now Julie Thomas — has vastly expanded this program with primary funding from U.S. Army Corps of Engineers and the California Division of Boating and Waterways.

When I started weather and oceanographic forecasting at Diablo Canyon in 1992, CDIP had around a dozen waverider buoy stations, mostly along the West Coast, including the Diablo Canyon buoy. At that time, a large gray mental box that contained the waverider receiver, processor and 300-baud modem was installed at the Ocean Lab near the Diablo Canyon Marina. Every 30 minutes, the old familiar dial-up sound of that modem would radiate throughout the lab as CDIP collected wave data over the phone line.

Diablo Canyon’s wave measuring device was installed with funding by Pacific Gas and Electric Co. in June 1983 after a fearsome El Niño-driven storm from the southwest destroyed the 2,700-foot-long wooden Unocal Pier in Port San Luis on March 1, 1983. It was later replaced with a steel-and-concrete structure in 1984, which became the Cal Poly Pier.

Today, the CDIP network has expanded to well over 100 stations in the Western Hemisphere, with many of these buoys deployed along the Atlantic coast and as far away as Guam and Brazil.

You can see the buoy data at https://cdip.ucsd.edu/. Interesting to note, one of these buoys (Egmont Channel Entrance) off St. Petersburg, Florida,  eported seawater temperatures as high as 89 degrees on Friday.

Get news headlines sent daily to your inbox

Unfortunately, both of these buoys have been offline. CDIP’s waverider buoy broke away from its 14,000-foot mooring back in October 2017 and eventually washed up on a beach in British Columbia. Data from NOAA’s SE PAPA buoy has been deemed unreliable and was no longer being released as of April 2018. Data is expected to be restored when the crew of a U.S. Coast Guard Cutter (a seagoing buoy tender boat) repairs the buoy.

On a very positive note, CDIP, in collaboration with the University of Washington, redeployed the waverider buoy at the Ocean Station Papa station last week. Wave spectral information from this location will provide a treasure trove of useful data that can be directly related to future weather and oceanographic conditions along the West Coast.

These replacements and repairs are happening just in time to help predict this winter’s possible El Niño-driven storms.

Thousands of customers could save up to 20 percent or more on their monthly energy bill by taking a simple step — enrolling in PG&E’s California Alternate Rates for Energy (CARE) program. The CARE program gives income-qualified households deep discounts on their energy bills, but nearly 1 in 10 eligible customers are not signed up for the program and are missing out on significant savings.

John Lindsey is Pacific Gas and Electric Co.’s Diablo Canyon Power Plant marine meteorologist and a media relations representative. Email him at pgeweather@pge.com or follow him on Twitter @PGE_John.